Records of Appleton reach back almost 1000 years – the legacy of the Romans can still be seen from the A49 running through Appleton. Described in 1086 as a ‘wasteland’, much has changed in the village. 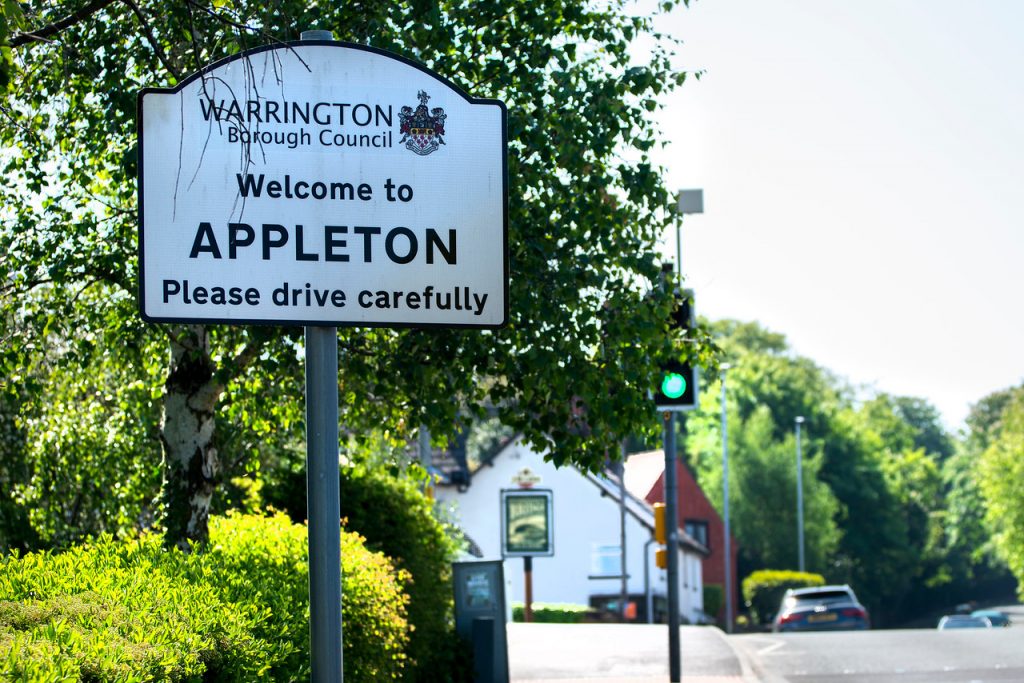 In the Domesday Survey of 1086, Appleton was valued at 16 shillings and described as a wasteland.

Prior to this survey, land in Appleton had been held by Dot, a Saxon Freeman, but he had been dispossessed of the land by Osborn Fitz Tezzon. Appleton then passed to the Aston family, and later to Adam De Dutton of  Arley. The name Appleton simply means ‘a settlement where apples grew’. 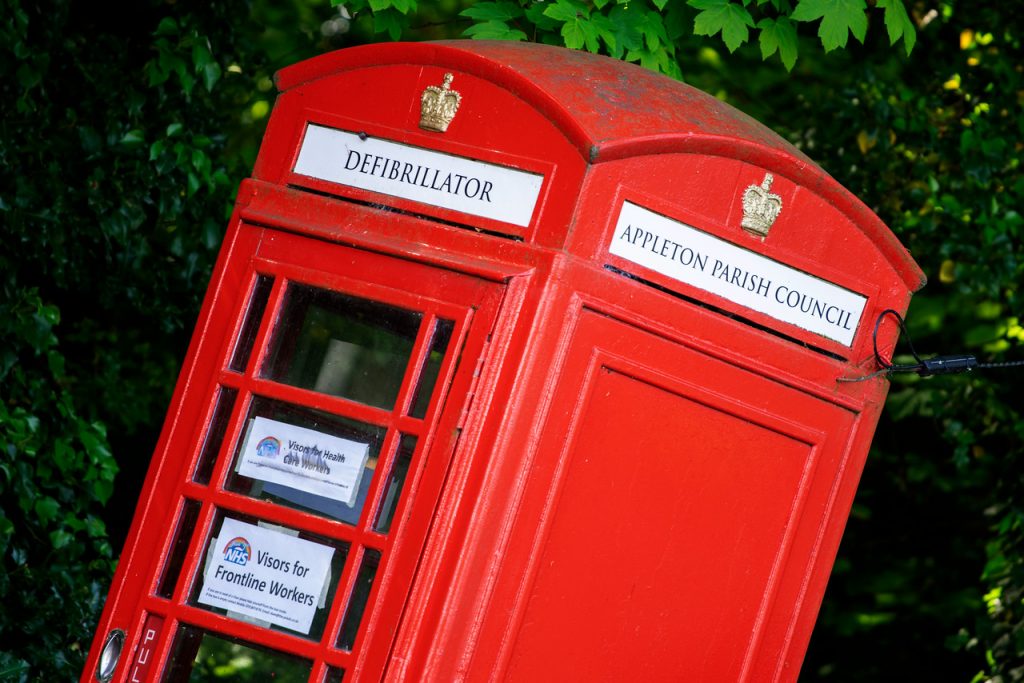 The Parish of Appleton

Until the 19th Century, Appleton included the hamlets of both Stockton Heath and Wilderspool to the north, Bradley to the east and Walton to the West. The Parish Council was formed in 1894.

A list of names, of those who lost their lives in the First and Second World Wars, is available here. 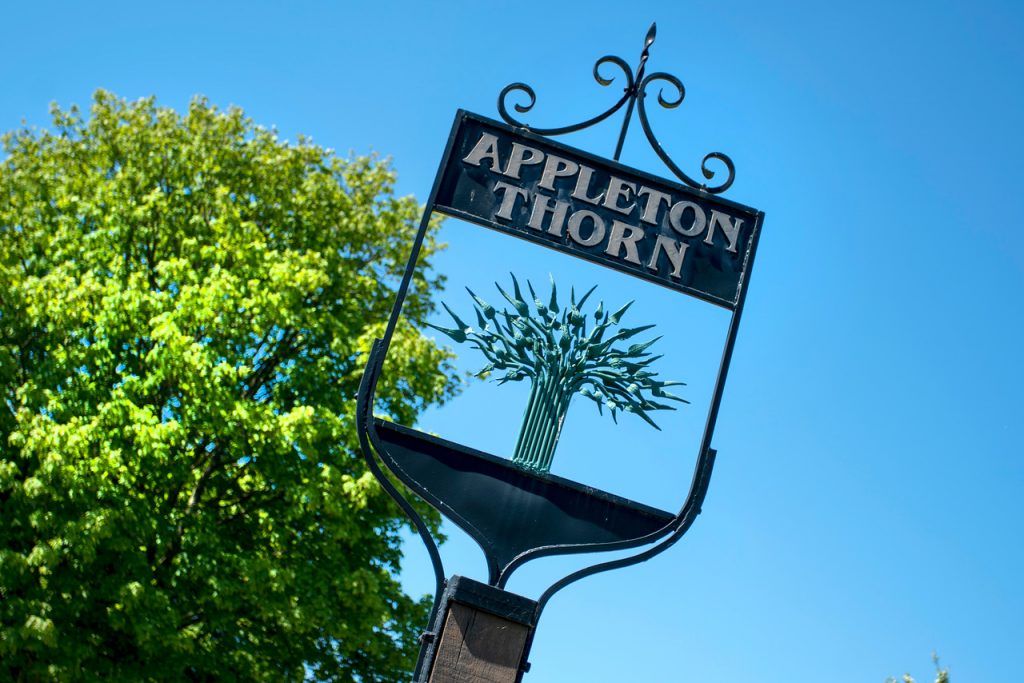 After much effort and deliberation, the village sign was unveiled on Friday 16 October 2009 by the Mayor of Warrington and the Chair of Appleton Parish Council.

The idea of a village sign for Appleton Thorn was first suggested by Cllr. Mike Stansfield at a Parish Council meeting in September 2006. Sign makers were contacted but nothing progressed until Cllr. Judith Walker provided a photograph of a village sign for ‘Appledore’ at the January 2008 meeting. This was met with wholehearted approval as a basis to move forward.

From a sketch by Cllr. John Price of a thorn tree within a sign headed ‘Appleton Thorn’, the design was developed by the artist/blacksmith/manufacturer for a galvanized, powder coated sign with the leaves of the tree hand forged before bolting onto an oak beam.

To celebrate the Queen’s Diamond Jubilee in 2012, Schools from across Appleton, Stockton Heath and Stretton took part in a unique project, each creating a carving representing a decade of the Queen’s reign. 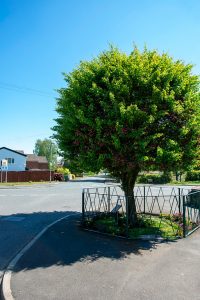 Adam De Dutton bought and planted the original thorn tree which gave the name to Appleton Thorn. The tree was said to be an offshoot of the Glastonbury thorn which grew from the staff or Joseph of Arimathea and to flower at Christmas. 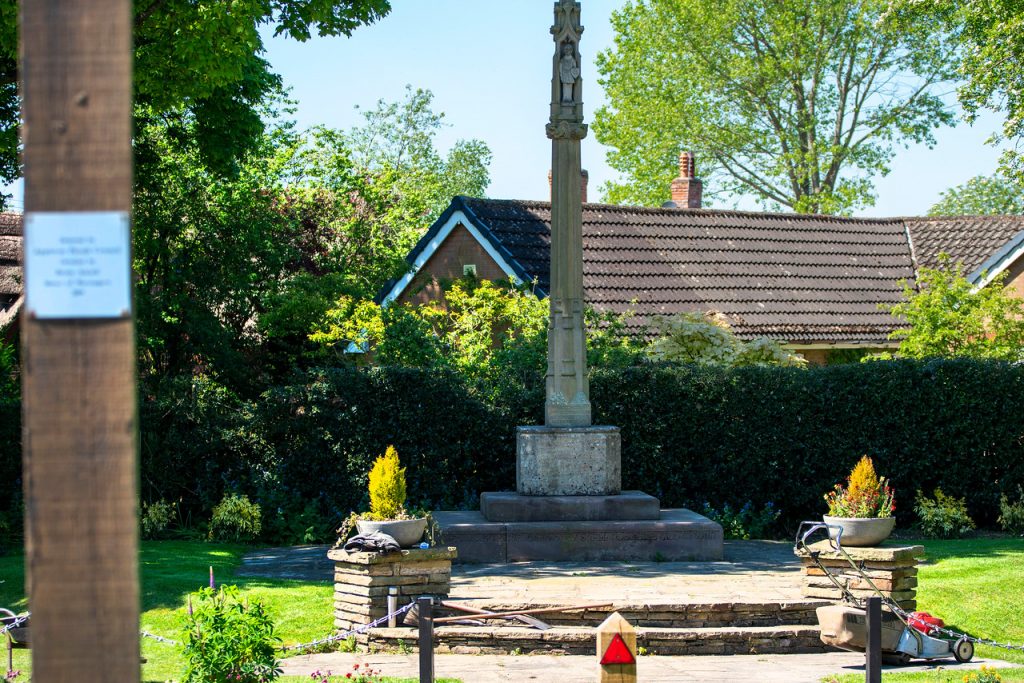 The Public Monument and Sculpture Association deemed the structure to be at risk.

It’s exact, original location seems to have been lost, two maps, one dated 1875, does not show the cross, only a well in Pepper Street. The roadway alignment on this map is at odds with other maps, which were produced later. A map of 1910, clearly indicates the presence of Appleton Cross, it may however have been a geographical reference, rather than a reference to the cross itself

It stands as a reminder of the days when in 1365, Friar Richard de Aputon of the Warrington Friar was ordained Sub-Deacon of Colwich. It is thought to be the only original cross in Cheshire. The cross was re-sited in 1973 to the junction of Stretton Road and Cann Lane. The work was supervised by the then director of the Warrington Museum, J. R. Rimmer. The operation led to the discovery of a small coin underneath the piece. It is about the size of a Farthing and wafer thin because of corrosion. The British Museum identified it as a Venetian Soldino of Antonio Vernier (1382-1400), and was first brought to the country in an Italian galley-fleet arriving in June 1400 to purchase wool and cloth. Because the coin had such a limited period of circulation, it allowed the dating of the cross to an unusually specific extreme. Using the coin to date the piece to the Fifteenth Century ties up speculation that it was a wayside or ‘Weeping Cross’ used as a resting place for funeral processions on their way to the nearest church or chapel of rest. The siting of this cross is convenient as a stopping place between Appleton Thorn and the Chapel of Rest at Stretton (the site of the present Stretton Church). The actual cross, long gone, would have been of wooden construction and possibly painted. It is likely that it was destroyed by the Puritans in the 17th Century, a common story throughout the country, where these hollowed out socket holes are found. The level of the road had been raised so much that the Cross was virtually buried apart from the top socket stone and it had been severely disturbed by roots from a sycamore tree which is under a preservation order.

What is on in South Warrington?

History of Appleton Booklet
This is now available from the Parish Council Office for £5.00.

Events – Out and about in Warrington

This website uses cookies to improve your experience while you navigate through the website. Out of these cookies, the cookies that are categorized as necessary are stored on your browser as they are essential for the working of basic functionalities of the website. We also use third-party cookies that help us analyze and understand how you use this website. These cookies will be stored in your browser only with your consent. You also have the option to opt-out of these cookies. But opting out of some of these cookies may have an effect on your browsing experience.
Necessary Always Enabled
Necessary cookies are absolutely essential for the website to function properly. This category only includes cookies that ensures basic functionalities and security features of the website. These cookies do not store any personal information.
Non-necessary
Any cookies that may not be particularly necessary for the website to function and is used specifically to collect user personal data via analytics, ads, other embedded contents are termed as non-necessary cookies. It is mandatory to procure user consent prior to running these cookies on your website.
SAVE & ACCEPT